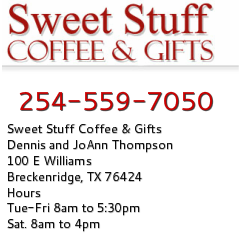 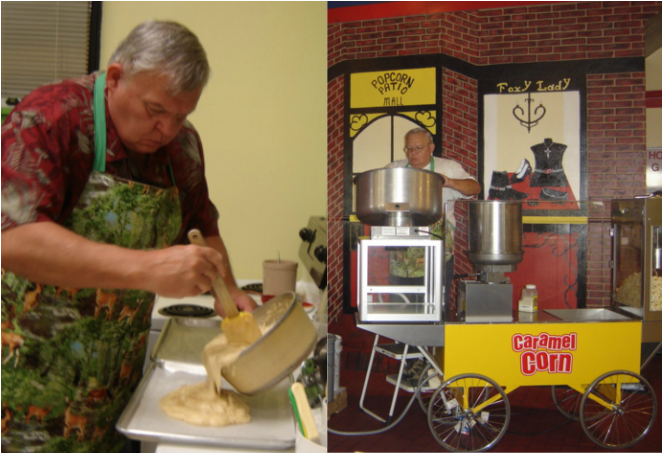 Welcome to our website. Why we are here only the Lord knows for sure. My husband was born and raised in Paulding Ohio, where we met in 1968, married in 1969, raised three children, lived there till he retired in 1998.That's when we sold it all , bought a truck with a thirty foot R.V. and sang our favorite song, On The Road Again. We loved the Texas winters in the valley till 2002, visited Rockport along the Gulf of Texas and felt like settling down again. It only lasted two years the humidity really got to us. One day Dennis (my husband) was reading a Texas real estate book, and amongst all the cattle and hunting ranches for sale was an ad for a candy shop. We laughed about that and two weeks later we visited the little town of Cross Plains with a population of less then two thousand.

What made us buy the business! We needed a challenge in life, We are not ready for the rocking chair, We wanted to be our own bosses, work our own hours, have Sundays off, All of the above. We did have experience in running a business, however we never made candy and I was never a baker.

Sweet Stuff Candy was created by Yvonne Peevy in 1986 and opened up in Cross Plains in 1997. She always loved to make candy but personal things were changing in her life and her family encouraged her to sell. She told us she had other offers on the place, but would not sell to someone who would move the business out of town. All the candy was made from scratch . She agreed to teach us for three months, if we did not learn by then we never would. We both learned the candy making in two months , the baking was not my cup of tea. So I struggled with it. We purchased a nice little home a few blocks from the shop, this town did not have our home church, although people were kind and friendly we were still lonely. In a years time we felt the business was going know where, simply stated we were very unhappy . Then the fire of 2005 hit and I felt it was our way out. When the smoke cleared , our home and business not touched I felt God wanted us to stick with it. New thoughts occurred, would our product sell in bigger towns, Dennis being a hunter and gun enthusiast loved gun shows.

We found one in Abilene signed up, made a lot of product and doing just a weekend we made more money then we had in two months. We really got excited booked craft shows and gun shows for every weekend. Had a short vacation to Colorado in August, and thought about moving there. For six months a realtor sent us info on buildings. We watched HGTV and knew we just had to have an old building we could live in and have our business in. Oh! But the prices there was no way, it was depressing us and the shows where not doing as well. So one day in February I said a prayer to GOD explaining we had a sixty thousand dollar pocket and I was to scared to purchase anything higher. A few days later my husband finds a building in a real estate book laughingly tells me it is a four story for that price. The strange part was when we looked at a map it was one hour away in a direction we had never been for the three years we were in this area. Following the directions from 183, the corner we were to turn on had our home church and across the street was the building, a 1925 four story with boarded windows, that had been empty for over 25 years. It was massive ugliness, the city inspector said we would have to hire certified electricians, and plumbers and be inspected before opening. My husband made the low bid which was excepted in two hours, all paper work was signed in March, our house was put on the market in April and sold in two weeks we had to move out by the first of June. In the meantime we had to keep the business alive and work on the building. The rest of this story is to long for this spot. My main point is to tell you I believe in God, He directs our path in ways we would never think to go and He makes the impossible very possible. There were moments while working on the building I'll always remember, the day we were hauling trash out I said I felt like a slave in a coal mine and I heard God whisper a diamond in the rough when an over whelming feeling of we must be crazy to do this an earth angel ( real person) came in asked us what we were doing, and then told us we would be successful, they were glad we were here, we were a blessing to the town, it would be beautiful. This happened so many times we knew God was sending these people to encourage us. This town of Breckenridge is full of encouragers .

Without God we would not be successful, without our determination and hard labor the work would never have been done. Without the talent of our interior designer and the work she did this would be just another building. Elaine Greene of Canon City Colorado, better known as the decorating dilemma doctor chose the colors, furniture, window dressing, did the art work and even designed our exterior sign.